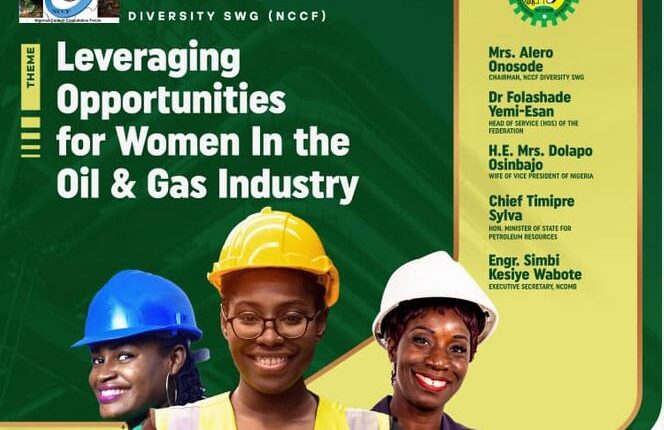 The conference, which will hold in Lagos on June 14, 2022, is themed, “Leveraging Opportunities for Women in the Oil and Gas Industry.”

The Executive Secretary of the NCDMB, Engr Simbi Wabote, will deliver the keynote address on “Leveraging Opportunities for Female Participation in the Oil and Gas Industry” while the Minister of State for Petroleum Resources, Chief Timipre Sylva will deliver a ministerial address.

Key industry players and dignitaries expected at the conference include the wife of the Vice President, Dolapo Osinbajo; Head of Service of the Federation, Folasade Yemi-Esan; Managing Director of SNEPCo, Elohor Aiboni; Chairman of OPTS/MD of Chevron Nigeria Limited, Rick Kennedy; and a member of the Nigerian National Petroleum Corporation (NNPC) board, Lami Ahmed.

Mainstreaming women in oil and gas

To increase women’s participation in the oil and gas industry, the NCDMB has been doing a lot. In October 2019, the NCDMB boss, Wabote announced that the Board would commence formulation of gender-friendly policies aimed at increasing access to funding, award of contracts and support for research and development, for the benefit of women operators in the Nigerian oil and gas industry.

”It is estimated that women occupy about 50 per cent of non-technical positions at entry-level compared to only 15 per cent of technical and field role positions.

“Gender diversity decreases with seniority with only a tiny proportion of women in executive positions. The percentage of women in the industry drops over time from 36 per cent to 24 per cent between the middle and executive level,” he said while quoting a study by the Global Energy Talent Index Report which indicated that there is a chronic shortage of women in the oil and gas industry.

He said NCDMB will review its strategy on the Nigerian Content Intervention Fund (NCI Fund), adding that ”access to finance is very important and we will look at our policy to see how we can support women who are serious to do business.”

The Executive Secretary assured that the Board would work with project promoters in the oil and gas industry to ensure the award of some contracts to companies owned by women, including the Nigeria Liquefied Natural Gas (NLNG) Train 7 project.

He also promised that the NCDMB would also encourage the study of sciences, technology, engineering and mathematics (STEM) by young girls in secondary schools and drive the collation of data on women who participate in various sectors of the oil and gas industry, so they can receive support.

Wabote confirmed that ”out of the total number trained by the Board, women constitute about 20 per cent of the trainees and we hope to increase the number of women trained to meet up the industry skilled labour demand.”

In 2017, the Board in partnership with the Bank of Industry (BOI), launched a $200m Nigerian Content Intervention Fund (NCIF) to provide low cost and accessible credit to service companies.  According to Wabote in an interview in 2021, almost 85 per cent of the fund has been accessed by Nigerian companies. The fund has about five products: equipment financing, contract financing, manufacturing, loan refinancing and community contractor refinancing. The loan interest rate, which is fixed at 8 per cent with five years span for repayment and one-year moratorium, has enabled most Nigerian companies to refinance their loans.

The Governing Council of the Board at its meeting in June 2020 approved the expansion of the NCIF  from $200 million to $350 million.

The Council chaired by the Minister of State for Petroleum Resources,  Sylva approved that $100 million from the additional funds would be deployed to boost the five existing loan products of the NCI Fund.

Similarly, the Council also approved that $20 million and $30 million respectively should be deployed to two newly developed loan product types – the Intervention Fund for Women in Oil & Gas and the Petroleum Technology Association of Nigeria (PETAN) Products, which include Working Capital loans and Capacity Building loans for PETAN member companies.

As part of the Board’s response to ameliorate the economic impact of the Covid-19 pandemic, the Governing Council approved the reduction of the interest rate from eight to six per cent per annum for all four of the loan products in April 2020. The Board also extended the moratorium for all loan products.

So far, some companies managed by women have benefitted from the NCI Fund because of the NCDMB’s deliberate actions to ensure that.

In 2021, the NCDMB inaugurated the Diversity Sectoral Working Group at a virtual engagement of the NCCF, a body set up by the Nigerian Oil and Gas Industry Content Development (NOGICD) Act to facilitate the collaboration of stakeholders and the development of ideas for the advancement of Nigerian Content in the oil and gas industry.

The Executive Secretary of the NCDMB, Wabote said that the creation of the diversity SWG was a product of the Women in Oil & Gas workshop organised by the Board in October 2019. He hinted that the aim of the Diversity SWG is to improve the participation of women in the industry as well as to promote all-inclusive gender policies.

Wabote announced that a portion of the NCIF domiciled with the Bank of Industry (BOI) will be set aside to support women operating in the oil & gas industry.

Stressing that sections 57 and 58 of the NOGICD Act 2010 supported the creation of a robust platform for sharing information and to serve as a ‘think-tank’ to develop policies and implement frameworks that will achieve sustainable development of the Nigerian content in the oil sector.

The NCDMB and the Nigerian Export-Import Bank (NEXIM) on July 1, 2021, began the roll-out of a $40 million intervention fund for qualified women entrepreneurs in the Nigerian oil and gas industry.

Under the scheme, the NCDMB is contributing $20m to the pool and it will be matched by the same amount in naira by NEXIM, to be converted at the prevailing official exchange rate.

The fund, which its Memorandum of Understanding (MoU)  on administration was signed by the NCDMB boss, Wabote and the Managing Director of NEXIM Bank, Abubakar Bello, mid-2021, would cover manufacturing, oil service contracts, environment management, leasing, logistics, catering and training.

According to Wabote while speaking at the signing ceremony, the maximum amount that can be borrowed by a single obligor is $500,000 or its Naira equivalent at the official exchange rate prevailing at the time of borrowing.

He confirmed that the tenor shall be up to five years and the applicable interest rate would be five per cent all-in per annum, fixed throughout the tenor of the loan.

Wabote also noted that the maximum processing time shall be 21 working days from the date the applicant has provided all required documentation and all applications shall be through the web.

In his remarks, the NEXIM Managing Director,  Bello said that the partnership with the Board fits into the Bank’s framework for supporting inclusion as well as its strategy to grow the service industry in Nigeria and take it to the point of export to the West African region and other oil and gas economies.

The Gas Sector’s Value Proposition is key to Attracting Talent

Prev Next
Leave a comment
The Energy Republic June Edition 2022

QatarEnergy joins Aiming for Zero, an industry initiative aiming to…

High performance off the shelf – Sensirion extends its successful…